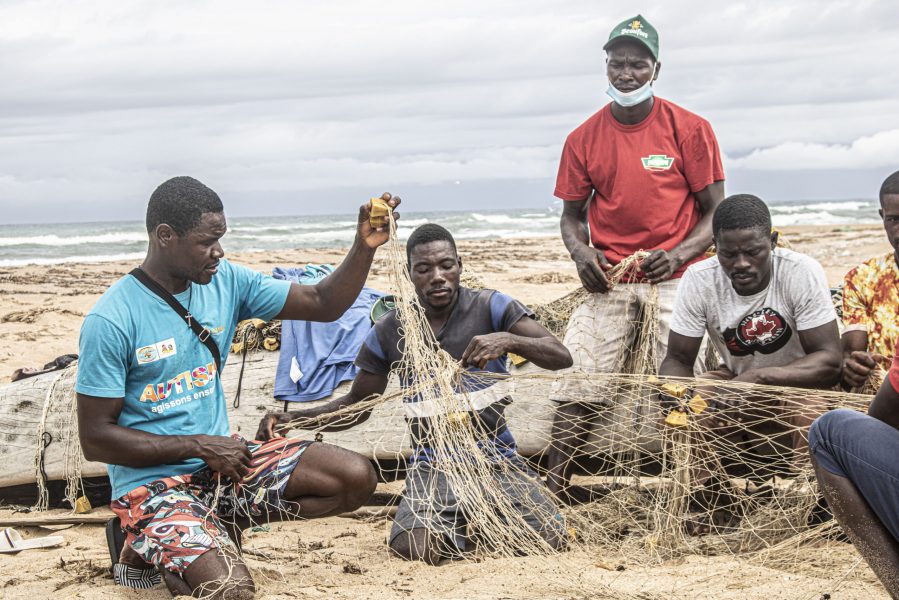 Like the entire West African coastline, Grand Lahou, a coastal city located 150 km west of Abidjan (Côte d’Ivoire) is increasingly threatened by rising sea levels and coastal erosion which, little by little, has continued to engulf the city.  A hundred years ago when the city was built there was approximately 2 km separating the ocean from the lagoon. Today this distance has shrunk to 200m in some places, and each year it grows smaller.

The city of three waters

Known as the “city of three waters” because the waters of the Atlantic Ocean, the Bandama River, and the Tagba Lagoon converge at its location, Grand Lahou has long been a treasured destination for tourists, traders, and travellers. Unfortunately, that time is long gone. Coastal erosion, exacerbated by the destructive impacts of climate change, is inexorably eating away at Grand Lahou, as it is all along the West African coast.

On the other hand, it has been worsened by the construction, 250 km to the north, of a hydroelectric dam built in the early 1970s. This has deprived the river of some of its power and capacity to resist the ocean. If nothing is done to halt the encroachment of the sea, the city may disappear under the waters.

The site offered a tangible and real-time meaning of the devastating reality of the climate crisis on peoples and their lands and territories, underscoring the urgency of the Africa opens in a new windowClimate Justice Gathering.

After the traditional greetings to the community authorities, the participants embarked in two dugout canoes to the mouth that connects the ocean to the lagoon. Michel Ségui, one of the participants, fisherman, and customary authority of the city served as our guide. He shared that the mouth has considerably narrowed, and its location is changing, moving from east to west along the strip of land. It has moved 2 km in 30 years (1985-2016), and according to forecasts, if nothing is done to stop this advance along with sea erosion, the city would disappear by 2050. The sea is advancing by 1 to 5 m per year along the entire West African coast, with spectacular advances of 10m sometimes.

How silting is impacting the ecosystems:

“If the mouth which was once 10m, even 15 or 20m deep in places, is now barely 2m in places, the phenomenon of ecosystem exchange that existed between the two waters, with fish that came to replenish and reproduce in the lagoon from the sea, and vice versa, is no longer done," – Michel Ségui

It goes without saying that the quantity of fish has also dropped drastically, and this directly affects the activities of women who support their families in the processing of fish and taking care of the families’ food needs. Children’s schooling is also destabilised due to the lack of resources for school fee payment.

The coastline and the fishermen face threats not only from the rising waters, but from shark attacks – which are occurring increasingly closer to the city – and from pirate boats, both of which have a significant impact on livelihoods by disrupting the fish catch of the day and taking away the fishermen’s nets:

Faced with this situation, Segui, in concordance with the community members, recommends some solutions that could be beneficial to the city:

Stabilisation of the lagoon to decrease the silting and to ensure that the village does not move further. Silting also impacts the mangroves, increases the water temperature of nearby waters, and drives fish further away. "The best thing to do is to stabilize the embouchement by building a dike,” says Michel Ségui. “With piers, large stones to stabilize the mouth, as we see elsewhere in San Pedro. This will also prevent frequent flooding in the village”. Attempts to deal with San Pedro have been thwarted by opens in a new windowa new coal plant that was built near the coast and had not factored in these issues. In fact, infrastructure projects such as the coal and dam projects generally appear not to consider the likely current and future climate-related impacts.

Sensitise the riparian communities so that they stop cutting the mangrove to make firewood. Segui: "Indeed, the mangrove is very good firewood, and as it is nearby, the populations do not know that they are very useful in the reproduction of fishery resources, cut it to make firewood. For some time, the chiefs of the communities have become aware of this and support us in raising awareness. They have understood that with global warming, coastal erosion, silting, we must preserve the mangroves, especially with the warming of the water, the fish go under the mangroves to reproduce”. Resolutions have been taken by local authorities to dissuade people from destroying mangroves. Any person who violates the rules pays a fine of 100 000f XOF and may have his boat withdrawn. These stipulations have slowed down the destruction of the mangroves. The community would like to learn from other communities, for example Mbour in opens in a new windowSenegal, to learn the techniques of opens in a new windowtransplanting and restoring mangroves. As an alternative to cutting the mangrove, the community intends to set up a wood park, to avoid that the residents are always tempted to cut the mangroves.

To counter the lack of resources, the community leaders are proposing “biological rest” for a portion of the lagoon. That is, prohibiting fishing in that area for a given time under the supervision of authorities. Such an undertaking would require a lot of awareness-raising and training with the people.

Potentially exploring sustainable fish farming methods and practices on the river or lagoon which might help considerably during the lean season of biological rest.

Certainly, some solutions are within reach because they do not require advanced technical knowledge. However, given all the hard or soft structures envisaged, coastal engineering is needed to avoid the remedy being worse than the illness. The opens in a new windowWACA program, a West African coastal management initiative funded by the World Bank, provides one such avenue to re-think community solutions. This program covers six countries: Côte d’Ivoire, Senegal, Togo, Benin, Sao Tome and Principe, and Mauritania.

The trip to Grand Lahou offered the group a window into the violent consequences of natural phenomena such as coastal erosion, exacerbated by human activities such as dams and the climate crisis in this community. As a case study, Grand Lahou speaks to the urgency of the moment for many communities across Africa and around the world for whom time is already running out.