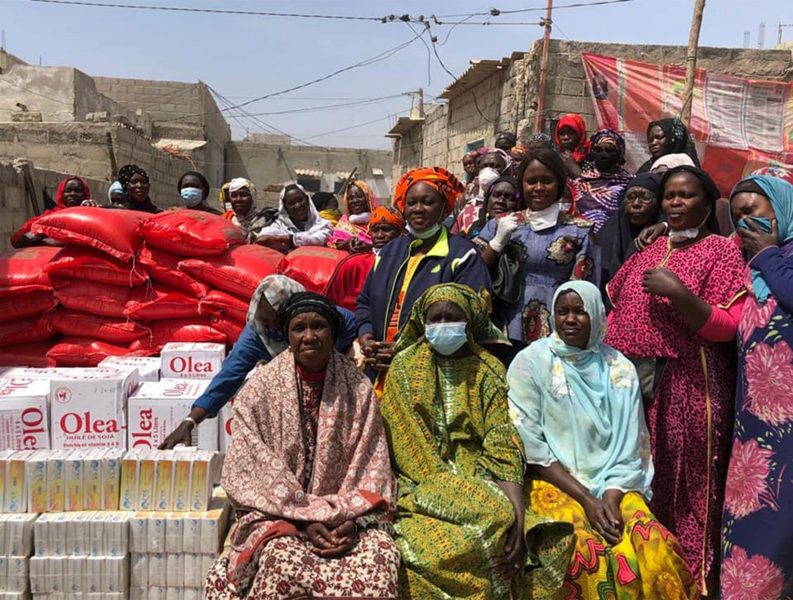 Organisation in a time of crisis.

For communities, organisations and movements, this current moment presents new challenges as well as opportunities for radical organizing and advocacy in support of women’s struggles for justice. Across the African continent, women activists are finding ways to mobilize, speak out against and demand action on injustices of water scarcity, violence, inadequate healthcare and other critical issues, and build effective responses to  opens in a new windowCOVID-19 in solidarity with others.

The novel coronavirus pandemic collides with many other crises playing out across the African continent – “climate heating, environmental degradation, unemployment, rising poverty, [water scarcity and food insecurity], and increased violence, specifically violence against women and civil conflicts in many countries” ( opens in a new windowCOVID-19 – Crisis Upon Crisis In Africa: An Eco-feminist Perspective, WoMin Alliance). Working class and opens in a new windowpeasant women in Africa have been hit particularly hard. Many rely on the informal economy to make a living, and play a big role as household food producers, caregivers, harvesters of water, energy and other basic goods. For organisations and movements, this current moment presents new challenges as well as opportunities for radical organizing and advocacy in support of women’s struggles for justice.

In light of the many challenges communities and support organisations are facing in the context of COVID-19, WoMin hosted a webinar featuring activists from Sierra Leone, Senegal, Madagascar, Côte d’Ivoire, South Africa, Uganda and Nigeria to share practical insights and exchange lessons around a critical question for many movements and organisations across Africa: ‘How do we support women’s organizing in a time of crisis?’

With 28 countries across the continent implementing various  opens in a new windowlockdown measures that restrict movement, enforce curfews and other restrictions, COVID-19 has presented new (but old) challenges for how we communicate with one another across distance. According to  opens in a new windowa 2019 report from GSMA, around 50% of the sub-Saharan population (600 million) has a mobile phone subscription, and 39% of those have access to a smartphone. Across the continent, WhatsApp is becoming an important space for information-sharing, organising and strategising within communities. A major challenge is  opens in a new windowthe cost of getting online.

Mobile phones have offered an important avenue for activists to put out alerts on service delivery challenges they face daily, report human rights abuses and gender-based violence cases. One striking example is the water scarcity crisis affecting over 24 communities across South Africa. Women from  opens in a new windowwater-stressed communities like Phola in Mpumalanga and Somkhele in KwaZulu-Natal communicate their challenges via WhatsApp and SMS, use mobile voice notes and regular alerts  opens in a new windowto get their stories out. Despite the South African government’s promises to ensure that these communities have access to water, many still wait in vain. Working in solidarity with the C19 Women’s Solidarity Forum, community activists  opens in a new windowhave taken their issues directly to the Department of Water and Sanitation (DWS), which  opens in a new windowpledged to scale up the provision of water and has failed to live up to those promises. At the time of writing, DWS has only confirmed receipt of the letter.

The African Development Bank  opens in a new windowrecently set up a USD $10 billion COVID-19 response facility that will provide funding to governments and the private sector. But communities heavily impacted by development projects, like those of Bargny, Senegal and San Pedro, Côte d’Ivoire will likely not benefit from any of those funds, which will go to big business and other interests. Social media is an increasingly vital and vibrant platform for advocacy and organising. Following a social media training workshop last year, women activists from these two communities use Facebook and WhatsApp to speak out on theexperiences of fisherwomen and market women, whose livelihoods have been severely impacted by COVID-19. Supported by  opens in a new windowLumière Synergie pour le Développement (LSD)and  opens in a new windowJVE-Côte d’Ivoire, women-led community groups have started to distribute food and hygiene parcels to those in urgent need.Read about their actionsvia Facebook opens in a new windowhere and  opens in a new windowhere.

In light of the high cost of data, both LSD and JVE have set up solidarity funds to ensure that women community leaders have the data support they need in order to organise effectively. LSD has also provided community leaders in Bargny with internet passes to facilitate their communications and hosts update meetings with activists every other week to coordinate responses.

Even with the surge of cellular tech, many communities are harnessing other accessible tools and platforms to organise and speak out as COVID-19 continues to expose the failures of health systems and state responses.In Uganda, a community radio station, opens in a new windowGreen Radio (supported by the  opens in a new windowNational Association for Progressive Environmentalists) provides a space for women to discuss response as a collective and to raise the gendered impacts of the pandemic. Women share their experiences and sensitize their communities on how to prevent the coronavirus in local languages. Green Radio also encourages listeners’ clubs so that women in communities can discuss different topics and call the radio’s toll-free line to ask questions.

Nigeria’s  opens in a new windowKebetkache Women Development & Resource Centreuses poetry, song and radio plays to help educate communities in the Niger Delta on COVID-19. Via WhatsApp, vox pops and other tools, women activists share songs that dispel myths about the disease and confront the government for lack of investment in healthcare infrastructure and failure to fulfil other obligations to the people.

Meanwhile, in Sierra Leone, where the experience of the 2014 Ebola outbreak holds important lessons, women are once again the “frontrunners” in the dissemination of information and sensitisation efforts using simple plays, posters and social media, according to Esther Kandeh of  opens in a new windowWomen on Mining and Extractive (WOME). While many rural families do not have access to television or phones, community radio has also proved a useful tool. As with other organisations participating in the exchange, WOME and Kebetkache are coordinating food, health and monetary support during the lockdown period.

For many, it’s basic needs that are front and centre as communities face catastrophic food insecurity, water and energy shortages. In Madagascar, communities living in the opens in a new windowmining concessions of the Base Toliara Project, approximately 1100km south-west of the capital, have very little access to COVID-19 information and updates.Chronic malnutrition affects much of the local population, with women and children hit hardest. So far, the leaders of  opens in a new windowFARM (Femme en Action Rurale de Madagascar) have organised sensitization sessions in 12 local communities with support from  opens in a new windowCRAAD-OI. They make use of posters translated into local language to share key information about preventative measures against COVID-19. During these sessions, they’ve also distributed food packs containing spirulina (a natural food supplement based on seaweed, well-known for its ability to strengthen immune defences and largely used for the fight against malnutrition in Madagascar) and 4800 pieces of soap to 1200 women. On top of this, they’ve set up funding so women can build their water reserves and a call alert system to report cases of gender-based violence (none have been reported thus far).

“Instead of providing us with basic support, they dumped the army on us,” says Caroline Ntaopane of the situation in South African communities, “and the army is violating the rights of people.” Militarisation and violence are on the rise in many African countries as governments employ repressive tactics to enforce lockdown measures.In Zimbabwe, small markets and people trying to make a living  opens in a new windowhave come under attack from often violentraids by police and the army. In Penhalonga, a gold opens in a new windowmining community located 20 kilometres north east of Mutare, women make up 90% of the artisanal miners in the area and have sustained their families on artisanal opens in a new windowmining for many years. The lockdown has forced women artisanal miners to depend on food support from government. However, the selection of beneficiaries of the government support is  opens in a new windowoften politically controlled. Many of these artisanal miners – who cannot work at night like their male counterparts due to risks and insecurity – are now forced to engage in alternative economic activities that include working on other people’s fields for a ‘wage’ of maze grain. The  opens in a new windowCentre for National Resource Governance has responded to this by setting up an alerts system for activists in communities to monitor violations, share experiences and offer solidarity action where possible.

Thank you to our partners and allies for sharing their experience and insights during this exchange: Esther Kandeh, Emem Okon, Rokhaya Diop, Sostine Namanya, Lilia Hantinirina, Clarisse Yapo as well as contributors, Caroline Ntaopane, Jayshree Prather, and all participants of both exchanges.

You can read the full contributions of the exchange in English and French,  opens in a new windowhere. Check out our COVID-19 Response page for more.