The future must be ecofeminist 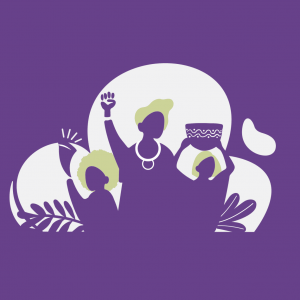 opens in a new windowEcofeminism is one of the core elements of WoMin’s political orientation as a Pan African alliance which works alongside organisations of women, peasants and communities impacted by extractives. It is also a crucial element of a just transition in response to the climate catastrophe and its intersections with other crises facing the African continent.

Amidst possibly the greatest systemic crisis facing humanity in this 21st century, an ecofeminist perspective is critical to imagining and advancing an African post-extractivist, feminist, and ecologically just alternative to the dominant destructive model of development for women, all people and the planet.

What are some of the ideas behind Ecofeminism?

Ecofeminism unites two words together: ecology and opens in a new windowfeminism.  As such, it can be defined as an activist and political movement that began in the 1970s and 1980s based on the idea that “ecology is a feminist issue and that feminism is an ecological issue” (Warren, 1997).

In particular, ecofeminism is built on the belief that women have a special relationship with nature because the gender division of labour brings them in direct contact with natural resources and the environment for subsistence, thereby giving them a special experience and knowledge of nature and its importance in the lives of all human beings.

As primary care-givers, women have a material connection to nature as key actors in farming and managing natural resources, as well as household consumption (MacGregor, 2006; Martinez-Alier, 2002; Agarwal, 1992): women harvest and produce the food their families eat, and they nourish and care for them too. They also gather the firewood and the medicinal herbs to heal the sick. Thus, women’s work and care of nature has always been key to sustaining the human race in every part of the world.

Taking insights from ecology, feminism and socialism, opens in a new windowecofeminism is based on the ideas that:

Ecofeminism offers us not only a way of making sense of the world around us, but it also offers values and a practice of living which challenges oppression. In particular, it challenges the globalisation of dominant Western and white male knowledge which often violently undermines local indigenous knowledge systems.

African ecofeminism is a political movement for systemic change

At the very heart of ecofeminism lies a challenge to all forms of unequal power. It is about changing from a way of living and seeing that is based on “power over” to one based on care and responsibility (“power with and power to”), including by creating solidarity between the environmental and the feminist movements, because ecofeminists believe both groups fight against the same broader framework of oppression.

African opens in a new windowEcofeminism, as an inclusive movement, involves analyses of problems at systemic level together with the strategic and political alliances which support the collective opens in a new windowactivism that defines the movement. Thus, it asserts that the current environmental crisis has been caused by the modern ways of producing food and other products, by how energy is produced, and the consumption habits of the rich, mainly in the developed world. The environmental crisis cannot be solved if the opens in a new windowcapitalist, patriarchal and extractivist development system is not transformed.

The African ecofeminist movement calls for an end to all forms of oppression, arguing that there can be no successful liberation of women or any other oppressed group without the liberation of nature too. Therefore, women, opens in a new windowpeasant and other indigenous groups who have a close relationship to the land and nature cannot live decent lives if there is environmental degradation, pollution and other harmful activities on the environment.

“It is our duty to protect all the living organisms in our ecosystem.  As human beings, we have no right to kill or destroy other living creatures and their natural habitats, especially the forests which are their homes. Furthermore, we must be respectful and extremely careful about the ways in which we are using our natural resources.  All this means that we must preserve the natural wealth of our community, because our survival also depends on it.”

Towards an African Ecofeminist approach to systemic change

WoMin draws its inspirations and ideas about African ecofeminism from the concrete defensive and offensive struggles of women who bear the brunt of extractivist patriarchy and form the core of struggles to defend the land, lives, livelihoods, way of life and future of their families and communities.

We believe that liberation cannot be achieved under the current oppressive systems of patriarchy, capitalism and new forms of colonialism under the guise of economic growth. As ecofeminists, we must withdraw our power and energy from the dominant systems of oppression, and work towards a total systemic transformation, which is the sine qua non condition for nature and all humans to be free.

Just like the African concept of UBUNTU, African ecofeminism emphasises the connections and the dependency between all forms of life. No life form can exist separate and on its own. Living in relationship to other living beings and nature demands an understanding of and compassion for the other.

The African ecofeminist ethic therefore values inclusion, togetherness, relationships and conserving life and nature. It is based on empathy and care, on the ability to hear and listen. So also, should the use of land, water and forests should be guided by care and an ethic of reciprocity. This is essential to preserve natural ecosystems and their diversity.

“When we use natural resources, we must take only what is sufficient for meeting our needs. If we cannot consume all of them, we must share them with others, but we must not sell them for our sole profit.  This means that we must live in love, trust, and solidarity with each other. We must feel and behave the same way with the nature and trees which give us the fresh air, joy and happiness, along with the rain and water we need every day.”

Leonie, a participant in the women’s dialogues on ecofeminist development alternatives, Toliara, Madagascar.